Simple, quick and without added sugar

When I started getting more into selfsufficiency a few years ago, food preservation was one of the biggest mysteries to me. Apparently it was possible to preserve one's harvest and astonishingly people had been able to do so without a freezer and other modern tools for a long time. For me the adventure of food preservation began with compote - with an idea and an experiment...

The informationen on this page might be out of date.

The content was last updated one year ago. In the meantime lots of things could have changed. The informationen are from 09.12.2018.

How I discovered my favourite method of food preservation - the experiment

For a long time, preserving food meant to me: a lot of sugar, a lot of vinegar, a lot of salt. But somehow anyway there was a growing feeling that there had to be another way.

Eventhough jam is nice from time to time, I wanted to make something from our fruit that had more to do with the original fruit. Something that was 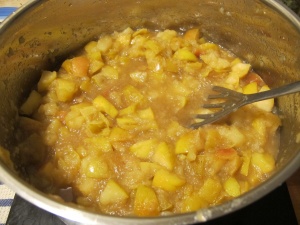 One day I felt adventurous enough to just give this a try: compote made from apples without added sugar, heated up and then put into sterilised jars.

I was curious but also sceptical of this experiment. Back then I didn't know of anyone else trying this method, but many people made jam - so there sure was a reason for that?!

And the compote kept for over a year - until we ate the last bit. By now we've made compote that's kept for two years and I bet it'll keep for even longer.

So far I've tried the following:

As extras I like to add lemon and spices like cinnamon, cloves, coriander or put in herbs like lemon balm, peppermint, ground ivy or similar during the cooking process. 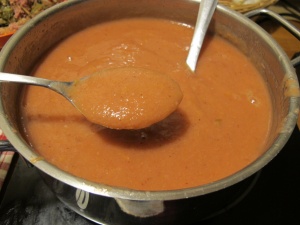 For the compote I cut the fruit (if possible including the skin) in small pieces. I pour a little bit of water in a pot, add the fruit and put the lid on top. This will boil on a medium temperature until the fruit falls apart.

For the puree I first prepare the fruit in the same way, but I will then puree it with a fruit mill (unfortunately the fruit skins get lost with this method) or blender.

The process of bottling

After several years of bottling fruit compote and puree, I still - more or less - use the same method from when I first experimented with this. It's quick, easy, doable for one person alone and you don't need any special equipment.

Of course there's other methods as well. But with many of them you heat up the already sealed jar - and so there's no way to tell how hot it is. As someone who works intuitively and without a recipe most of the time, this is rather frustrating.

Especially if there's a simple and easy alternative...

I use thick gloves to do this. Tongs also come in handy. 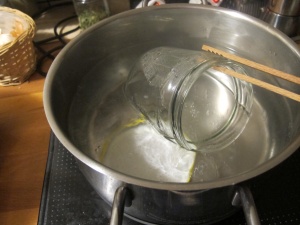 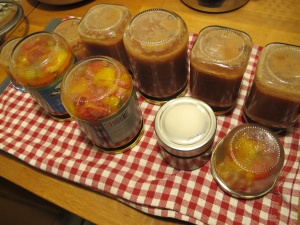 Temperature: When you're pouring the compote / puree in jars, everything has to be as hot as possible. I usually only take one or two jars at once out of the boiling water, so they don't cool down too much.

Cleanliness: The jar should not have any fruit on the outside, because it can easily get mouldy. It's especially important that there's no fruit between jar and lid because it might then not keep completely tight. Still it often happens that compote / puree drips on the jar - I use a towel that I dip in hot water to clean it.

Acid: For most fruit this is not an issue because they are naturally high in acid - together with the natural sugar content, thisis enough to keep your food from going off. If you're compote / puree is not acidic or sweet enough, there's a risk that botulinus bacteria can develop in the airthight environment of the jar. If you're using fruit that is especially low in acid, you might want to consider adding extra acid (e.g. lemon or lime juice or powder) or sugar. It's also an option to heat up the jar one more time after it's closed - in the oven or a pot with water on the bottom.

If you want to learn more about natural conservation of food, this is my absolute favourite book on the topic: "Preserving food without freezing or canning" by Terre Vivante, a french eco gardening magazine. It's all about traditional techniques of preservation using salt, oil, sugar, alcohol, vinegar, drying, cold storage and lactic fermentation. 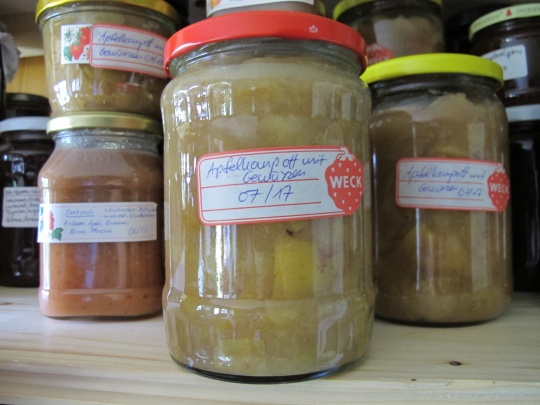